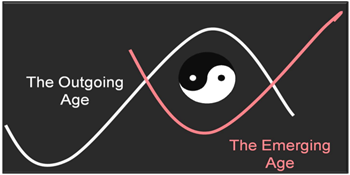 The Dance of the Curves

We live during a time when two worlds are operating at the same time as depicted in the Sigmoid Curve – the one of the industrial age, which is waning and the new emerging age and economy that is only just gaining its stride. Ascentia’s work is very much about navigating this journey. This requires bringing ancient wisdom together with 21st Century knowledge and technology. Out of this new business, community, governance and leadership models and frameworks for application in all types of organizations emerge.

‘Content is King, but there’s a Queen in town in her name is ‘Context’. At Ascentia we work with both.

Once we change our lenses to experience this new curve, we can see possibilities emerge that were once invisible. To shift the way we see the world, we need a new context, that is a new framework to experience the world around us. Rather than seeing water as merely a physical element necessary for life; it is a transformational agent that can lead us into new fresh ways of innovative thinking and action. Rather than seeing rebellious teens who disrupt every system they are in as ‘youth at risk’, these are the canaries in the mindshaft who are can become a new breed of entrepreneur showing us where we must change and how. Rather than seeing waste what we throw away, it is a vehicle of helping us shift what we value and how we can reimagine, reinvent, and redesign how we live.

When we shift our lenses and measure what is important, we realize that we live in a world of abundance, of knowledge, wisdom, insight and resources. It’s time to use them for the benefit of all who inhabit this wonderful living library known as Earth. This is the mission Ascentia has taken on.

First a little theory: Every system has a lifecycle, including economies. This lifecycle has various key phases: birth, adolescence, growth and maturity, then prime which is followed by deepening maturity, decline and then death. The cycle of human life requires that as we reach our prime, a new generation in birthed in order to carry on the line as the older generation declines.

There is an economic theory that works with the same principles; an economy grows and develops before the first curve reaches its prime a new economy/age is born. This pattern is known as the sigmoid curve, sigmoid is derived from the Greek word ‘sigmoides ‘, which means ‘s-shaped’. In applying it to our current economic scenario, the first curve is the Industrial economy, which is currently in decline. The new curve that is emerging has received many names as it has matured, Information Age, Knowledge Economy, Cyber Age, Digital Age, Green Economy, but it doesn’t really have it’s true identity yet. This new economic curve has all of these attributes, enabled by a technological and social revolution.

This new curve has different values, success measures, indicators and currencies. Like a child, the new curve needs the resources of the old curve to grow and mature. During the period of transition, the two curves co-exist with two distinct sets of ideologies, values, and ways of doing business rubbing up against each other. This creates confusion, and a clash of ideologies, values and ways of doing business that creates both conflict and chaos. The chaos is a vital way in which the new curve utilizes the resources from the prime curve to grow – while developing its own ideology and way of life. There is a ‘messiness’ that occurs with the clash of the new and the old. This collision is critical for the unmasking of the old ways and for change to take place. When this new curve gets strong enough, it is able to exist on its own.

The challenge is that both curves need each other. The old curve needs the vitality and new ideas to make a graceful exit; the new curve requires the resources, heritage, and wisdom of the old curve so it doesn’t make the same mistakes. These two curves need to learn to dance with each other rather than battle. Ascentia is a choreographer of this dance.